I will continue to talk about the effects of Okada Purifying Therapy.

In addition to Japan, the survey was conducted in 15 countries, including the United States, Asia (Thailand, Taiwan, South Korea), Latin America (Chile, Peru, Argentina, Mexico, Brazil), and Southern Europe (Spain, Portugal). Especially in the United States, Asia, and Latin America, we received responses from more than 1,000 people each, so the data is quite reliable. This result was published in the highest-ranked medical journal in the field of integrative medicine “Journal of Alternative and Complementary Medicine.” (2020; 26 (8): 708-720). The article was evaluated by experts from all over the world as a very interesting result. There is a Japanese report in the MOA Health Science Center Research Report Collection (2020; 24: 21-33), so please read it if you are interested.

As I already mentioned, this study was designed to investigate 1. How much the symptoms improve with Purifying Therapy, 2. Are there conditions that make it easier for the symptoms to improve or increase? 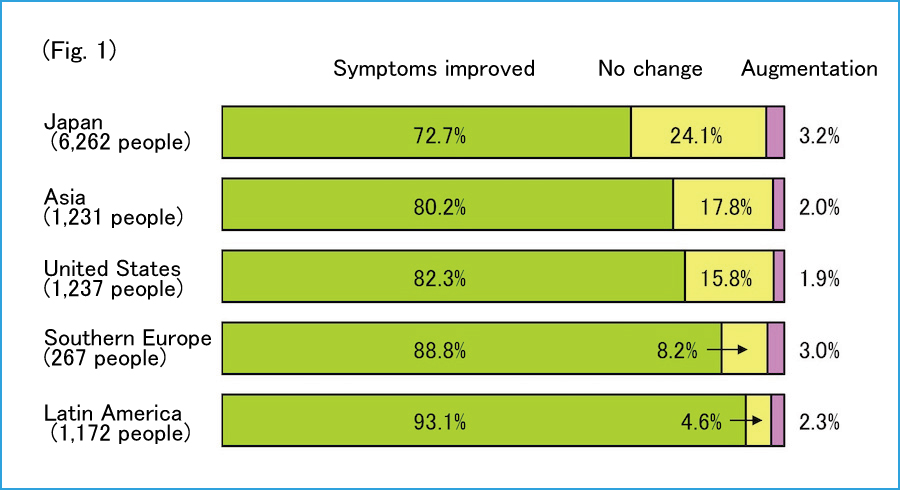 Figure 1 shows community changes in overall symptoms. Physical pain, psychiatric symptoms, and autonomic nervous symptoms all showed similar results since the improvement rate itself only differed by a few percent. What is interesting is that the improvement rate of Japanese people was about 70%, but it was more than 80% in Asia and the United States, and more than 90% in Latin America. I was just amazed that there was such a difference in the improvement rate. 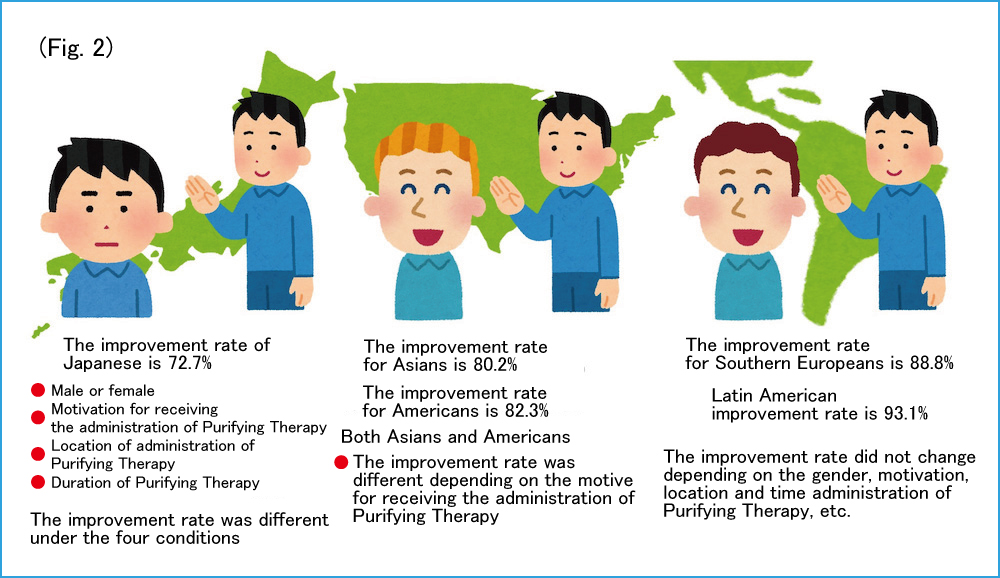 So why was “community” so important? One of the reasons is the difference in the way of thinking about so-called “hand healing.” Latin Americans tend to have spiritual ways of viewing things. There is also a traditional “hand healing,” so it seems that Purifying Therapy was not too uncomfortable for them. In fact, 67% of people received Purifying Therapy with the expectation that it would be effective even though it was their first try. Latin Americans also tend to be sensitive to pain and may not have missed even the slightest change in symptoms.

【Profile】
Kiyoshi Suzuki
Graduated from Tohoku University School of Medicine in 1981. Medical doctor. After working as a deputy director of the pediatric department at Sakakibara Memorial Hospital, working at Seijo Clinic, and as a director of the Gyokusenkai MOA Takanawa Clinic and Tokyo Clinic, he was the president of the MOA Health Science Foundation and the honorary director of the Tokyo Wellness Center. (Director of Japanese Association for Alternative, Complementary and Traditional Medicine and Chairman of the International Committee. In 1994, he was awarded the Young Investigator’s Award by the Japanese Society of Pediatric Cardiology.