I gave an overview in “Effects and Safety of Okada Purifying Therapy” in Column 2, but from this time on, I will introduce the representative research results that we have conducted so far in a series. First of all, I would like to talk about the “National Survey of Bioenergy Therapy-Effectiveness / Safety and Related Factors (Journal of the Japanese Society of Integrative Medicine 2009; 2: 37-43),” which triggered the widespread recognition of Okada Purifying Therapy.

In this study, using the latter method, 1) how much the symptoms improve with Purifying Therapy, 2) are there conditions that make it easier for the symptoms to improve / enhance, and 3) do the improvement rates and conditions differ depending on the country or ethnic group? Based on such plan, we started to investigate. In November 2006, we conducted a preliminary survey in Japan to prepare for a full-scale international survey. Although it was still a preliminary stage, surprisingly, about 14,000 people participated in just two weeks. There is no other research on energy therapy with so many people participating in the world.

More than 75% of those who cooperated in the survey were women, more than 55% were over 60 years old, and more than 80% were certified Purifying Therapy therapists (MOA members). There is a great deal of bias in the demographics of the participants, so a survey of all Japanese citizens could have yielded different results.

Participants received the treatment for 30 minutes or more. Before and after the treatment, the degree of symptoms of 1 body pain, 2 irritability / anxiety / depression (psychiatric symptoms), 3 palpitation / cold limbs / dizziness (autonomous neurological symptoms) had to be evaluated by participants in five stages (0: none, 1: a little, 2: a little, 3: pretty, 4: very). Seventy-five percent had physical pain before the treatment, 50% said they had psychiatric symptoms, and 40% had autonomic symptoms.

Looking at the conditions under which the improvement rate was the highest, it was the case where the woman received the treatment for 60 minutes or more. It is difficult to judge whether women are really easier to improve or whether it is due to their kindness toward the practitioner who administered the treatment. 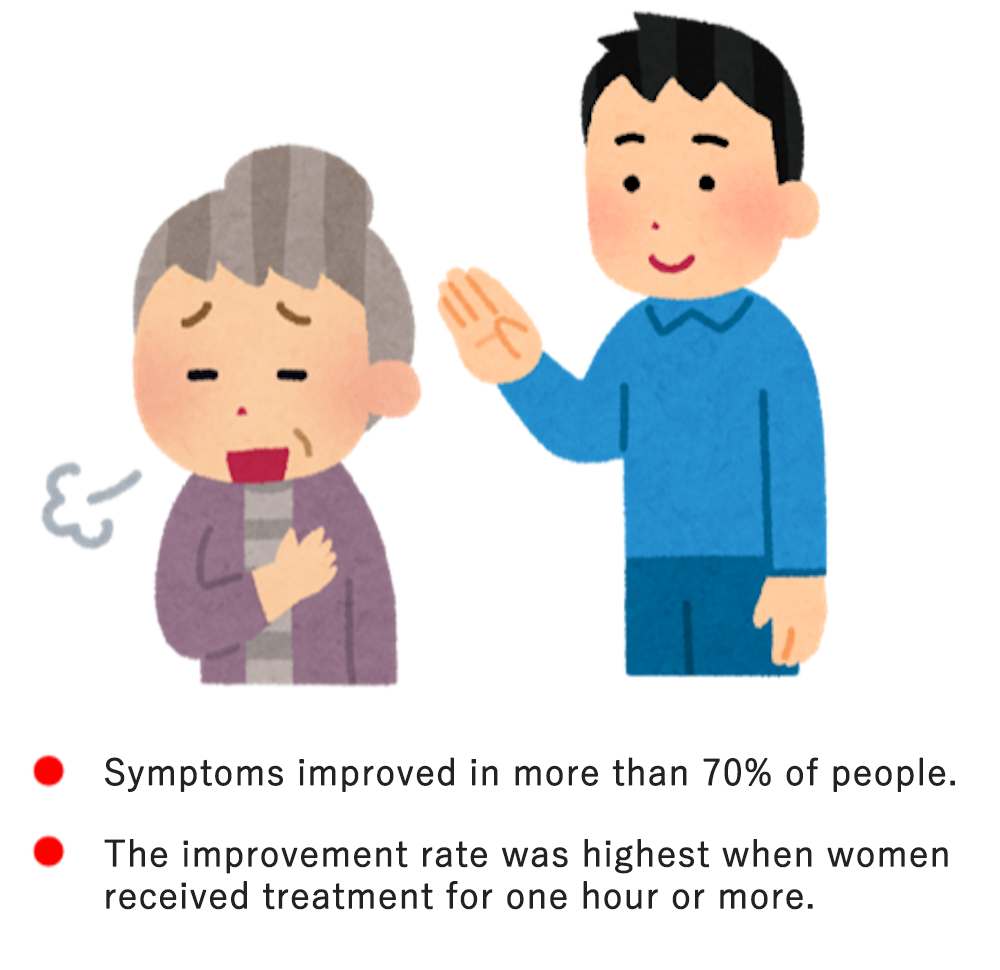 1.5% to 4.5% of the respondents answered that their symptoms increased after the treatment. However, the increase in symptoms was temporary. Most people recovered within a few hours by watching the situation or adding treatment. As an interesting result, many MOA members over the age of 60 had increased body pain after the procedure. According to the theory of Purifying Therapy, the treatment may dissolve toxins (spiritual clouds) in the body and temporarily increase the symptoms. Those MOA members, who are familiar with the theory, may have taken the increase of symptoms as validation of the dissolving toxins. Thus, they may accept the increase in their symptoms as better than no changes in symptoms.

Thus, it is necessary to think carefully about how to interpret the obtained results. That is the real thrill of research and the difficulty.

Next time, I will introduce the results of an international survey of Purifying Therapy conducted from 2008 to 2009. I will share what is the same or different from this preliminary survey in Japan and the international survey. Please look forward to it.

【Profile】
Kiyoshi Suzuki
Dr. Suzuki graduated from the Chiba University School of Medicine in 1981; medical doctor. After working as Deputy Director of Pediatrics at Sakakibara Memorial Hospital, he worked at the MOA Seijô Clinic, and is director of (Medical) Gyokusenkai MOA Takanawa Clinic / Tokyo Clinic, President of THE MOA Health Science Foundation and Honorary Director of Tokyo Wellness Center. (One company) He is a Director of the Japan Society for Integrated Medical Sciences and Chairman of the International Committee. In 1994, he was awarded the Young Investigator’s Award by the Japanese Circulation Society.