The 2nd Effectiveness and Safety of the Okada Purifying Therapy

The Okada Health and Wellness Program have three pillars: Purifying Therapy, Healthy Eating Program, and Arts and Culture Program. This time, I will share about the efficacy and safety of the Okada Purifying Therapy from a scientific and objective perspective. Purifying Therapy can be said to be the lifeline of the Okada Health and Wellness Program, so please check the MOA website and books on Purifying Therapy for specific details and theories.
Purifying Therapy is technically classified in the same “bioenergy therapy” as healing touch, Reiki, and external qigong. The definition of energy therapy is “a non-invasive (non-damaging) therapy in which the practitioner uses his/her own bioenergy to work on the bioenergy of the other person.” The treatise on “Basics and Clinical Practice of Energy Therapy” summarizes the basic knowledge of energy therapy and how to incorporate it into medical care. It was published in the journal of the Japan Society for Integrated Medical Sciences in 2015; so if you are interested, please contact the MOA Healthy Life Center in your area.

1. Symptoms Often Improve When Receiving Purifying Therapy, and It Is Highly Safe 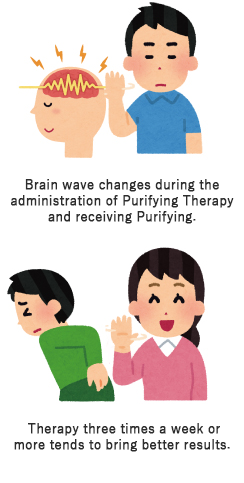 I am not suggesting that Purifying Therapy is not just a mental effect; a placebo effect. According to a study by the MOA Health Science Foundation, even if Purifying Therapy is performed without the person’s knowledge, the brain waves and electrocardiogram change only during the procedure. It is a scientific and objective fact that the bioenergy of the practitioner affects the bioenergy of the other party. For more information, please refer to the 2012 MOA Health Science Foundation Research Report, “Effects of Okada Purifying Therapy on Human EEG.” The original work of this treatise was also published in an American medical journal in 2012 (J Altern Complement Med 2012; 18: 875-879).
Even with other bioenergy therapies, various changes can be seen in the body during the procedure. There are also reports that there were differences in the functions of immune cells in humans and also animals, and that there were differences in the growth of cancer cells in petri dishes. However, even if experts around the world measure it in various ways, the energy itself cannot be proven yet. Don’t you think it’s strange?
In summary, I can state that the change in symptoms due to Purifying Therapy is related not only to the effect of energy itself, but also to the place and atmosphere of the treatment and the relationship of trust with the practitioner and recipients.

4. Things to be Aware of during the Purifying Therapy

I already shared that Purifying Therapy is highly safe. However, if the symptoms are severe and unstable, the symptoms may become stronger even temporarily. If one feels sick during the Purifying Therapy, I recommend that you stop the procedure immediately and consult his doctor or clinic, if necessary. In particular, one should be aware of this during the Purifying Therapy for those with bronchial asthma attacks and/or mental instability.
Bronchial asthma has chronic inflammation of the airways; and if the symptoms become severe even temporarily, breathing may not be possible, leading to a dangerous condition. There are effective inhaled medicines these days, so I suggest such people to have these medicines on hand, in order for them to receive the Purifying Therapy with peace of mind.
If they are mentally unstable, especially if they have forgotten to take the medicine they should be taking, they may get into a mental panic. It is recommended that they take the prescribed medication while receiving Purifying Therapy.